Over the years, I’ve noticed myself occasionally engaging in behavior that seemed like self-sabotage.

So I decided to ask myself: “Self, what’s up with this?”

A few ideas came to mind (which I’ll share in the next post), but one emerged as the leader and root cause.

I remembered my third grade Catholic school teacher, Mrs. McGinley, telling us stories about Jesus. How he manifested extra bread and fish for hungry people. How he helped sick people feel better and how he made extra wine at a party. At 8 years old, I thought: “This guy is cool.”

I liked hearing about his willingness to speak his mind/heart too. Supposedly, he often got in trouble with the Pharisees (“the religious rules guys”) precisely because he followed his heart, not their rules. I could relate.

(Note: This is not a “religious” story, please bear with me while I get to the point).

What I realized is that Jesus was the very first person I heard about who followed his calling (Later I learned of many others like Buddha (left the palace to witness human suffering), Socrates (exposed ignorance and drank the hemlock), Harriet Tubman (antislavery rescuer), and the list goes on :)), but those initial stories really impacted me, both because I was so young, and because, as you know, things didn’t turn out all that great for Jesus (at least not in a worldly sense).

So, what’s my point?

Well, it’s this: After learning about his public-speaking (basically encouraging people to be kind to each other), his run-ins with the “rules guys,” eventual small-celebrity-status, then most of his friends abandoning him, and him being murdered on a cross, my little girl self wondered if there always had to be such a terrifying outcome for doing one’s work in the world. 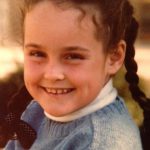 (3rd grade me)
As an adult, music and writing are my spiritual practice(s) and I do my work in the world. Even so, I have to admit there have been times, I’ve unconsciously shied away from stepping up. As strange as it sounds, this old memory is what I found buried underneath the fear and hesitation.

My cells have been screaming:

“When you follow your calling, your bliss, your creativity, your dreams, you are entering a danger zone, so, if you must do it, try to keep it to a minimum, bring it down a notch or do it in someone else’s shadow” (I have, at times, loved being an opening act for this reason, not that it’s not awesome (because it surely can be), but it also feels “safer.”)

Are there any places in your life where you stay in the metaphorical role of the opening act, hiding just a little?

If not, what are the main things that make it possible for you to be who you are in all your glory?

I’d love to hear from you!

So much love,
Anne

Ps 2: If you’ve been in the closet about your songwriting, come join our Online Songwriting Circle! Registration ends November 14th, 2014. To join, send me an email with a song.

((If you’re afraid you can’t afford it, apply for our one scholarship spot by emailing me a song and telling me why I should pick you))