I’d like to share with you that I’m going to be playing at EvanstonSPACE on Thursday, January 16th. I’m thrilled to be returning to this beautiful venue and I hope you’ll join us on this special evening. A lot of love and care is going into this concert, as I’ll be releasing a new record, Dora, as well as playing songs from my older albums. In addition, there are a bunch of tour dates coming up across the country so please take a look for concerts near you, and if you feel like it, come say hi after a show – I do love hearing from you!

I want to tell you about an amazing person named Claire who I worked with on a project, an album of poems-turned-into-songs called Dora. Claire and I planned to share this record with you this Fall but things took a very unexpected turn.

Claire Clube (pictured below) was a poet and a dear friend who I initially met at Club Passim in Cambridge, MA. She was probably one of the most loving, fun and brave people I have ever known. She was fearless about creating things and spending time and resources on artistic projects. I watched her expect the best of people and their talents. She never worried, she just showed up. Claire traveled quite a bit, worked on projects with her own children and she had most recently adopted a three-year-old boy named Rashid from Kenya.

Back in August of 2010, I recorded an album of her poetry in Somerville, MA. I was huge (8 months pregnant), it was extremely hot out, and I had finally decided to re-allow myself to drink large iced coffees because I was having trouble staying awake for longer than 2 hours at a time. 😉

During this time, I sat down at Q Division Studios’ delicious Yamaha baby grand and, on several afternoons, recorded 9 songs (poems of Claire’s that I had turned into songs over the previous few months) with a live band that included Rose Polenzani, Billy Beard, Joe McMahon, Steve Scully, Jennifer Kimball, Frank Marotta, Jr., Paul Ahlstrand, Joe Tooley, and others. For me, it was a time of many naps (they have comfortable couches ;)), creative flow and of taking big musical risks. Somehow setting someone else’s words really freed me to push musical boundaries. Claire and I were really happy with the end result and I hope it is something you will find both beautiful and unusual.

Tragically, this past July, Claire and her daughter Bess were killed in a plane crash. So shocking was this news to me, that it took me some time to even believe it. The fact that this extremely full-of-life, joyful, in the middle of doing so many things woman, could leave, was more than surprising.

I do not write you this to make you sad, but rather to express that I know she wanted, as much as I do, to share these poem-songs with you and so when the Dora record comes out on Valentine’s Day 2014, I will be letting you know about it. I hope you will buy a copy because the CD money will go to support the little boy, Rashid, who Claire had adopted, but now can no longer take care of. Even though you didn’t know her, you can be a part of her legacy through enjoying this music. I am reminded as I write this that my friend inspired me to live fully and courageously and that she had a happy life while she was here. That’s what I’ll carry with me.

Claire and her daughter Bess 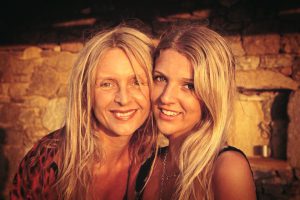